Stevia, an alternative sweetener with 0 calories and a glycemic index of 0, seems at face value to be nature's perfect sweetener! 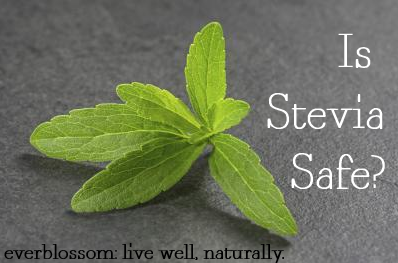 Is stevia safe, though?

After hearing some concerns about the safety of using stevia as a food additive, I did some research. Here's what I found.

What I Found: Stevia has only recently been approved by the FDA as a food additive, and it's actually NOT approved in its most pure forms. It is only approved when the "sweet" chemical rebaudioside A is isolated. Many stevia products are made by adding this compound to xylitol and/or erythritol (two natural but highly processed sugar alcohols) and often natural flavors and sometimes sketchy ingedients - "natural flavors" for example.

You can buy pure stevia and stevia extract to use in your own food, but you will not find pre-made foods made with unadulterated stevia available for sale in the U.S. (as of this writing.) Stevia extracts and pure powdered forms are sold as a dietary supplement rather than as a food item.

What I Found: The stevia plant is closely related to the ragweed plant, which a lot of people are allergic to. It may cause an allergic reaction in people who are sensitive to any of that family of plants, which also includes chrysanthemums, marigolds, and daisies.

That said, some who are allergic to these have not found any issues with using stevia. Allergies are notoriously weird and inconsistent, so I would suggest avoiding it if you are allergic to any of these or experimenting lightly at first, such as by adding a drop or two of the extract to a beverage and then waiting at least 24 hours to note any reaction.

The Concern: Stevia is harmful to the endocrine system.

What I Found: There are concerns about stevia disrupting hormonal balance and rumors that certain indigenous populations have used the plant as a form of birth control.

I was not able to find a credible source confirming any historical use of stevia as a contraceptive. *shrug*

There was a study on rats done that showed that even enormous amounts of stevia (relatively speaking..) did not harm male fertility. Reb A was also studied on both male and female rats in 2008 and no link to infertility was found.

Plenty of anecdotal evidence I came across in my research also shows that plenty of people have conceived children while using stevia daily. 😉

More info on stevia and fertility.

The Concern: Stevia "tricks" the brain into craving carbohydrates.

What I Found: Some have reported that stevia has only increased their sugar cravings and has been unhelpful as a substitute. Others have even claimed that stevia products still spike their blood sugar.

I personally find that it curbs my sugar cravings perfectly. So do a lot of other people. I think this is one of those things that is highly personal and you can't really know how it's going to work for you unless you try it.

Numerous studies show stevia to have a glycemic index of 0, meaning that it won't affect blood sugar at all. However, some people do claim that it raises their blood sugar so if that's something you need to be careful with, pay close attention to your numbers when you first try it.

The Concern: Stevia is too processed to be healthy.

What I Found: Many products containing stevia are certainly too processed for my liking. I am comfortable using it in ground/powdered form and in the form of an extract containing no artificial ingredients. These processing methods are minimal and since I could easily grind something or make an extract in my own kitchen, I don't mind buying things that are made this way.

I am comfortable enough with the information I found to continue using it myself, especially as I'm trying to achieve a healthy weight loss and am not trying to conceive.

Based on what I found, I do recommend using stevia in a pure powdered or unadulterated extract form IF:

Mountain Rose Herbs sells stevia leaf powder. I haven't personally tried it because I prefer to use the extract, but EVERYTHING I have ordered from MRH has been of outstanding quality so I feel good about recommending them.
Stevia extract is available at Vitacost, Amazon, and Abe's Market. Vitacost brand and Sweet leaf are two brands I really like. 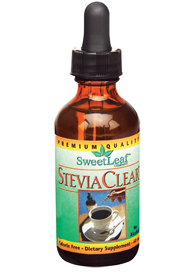 I also like Vitacost's brand of stevia extract as well. It's a vegetable glycerine-based extract and is offered at a GREAT price. (If you are a first-time Vitacost customer, you can click this link to get a $10 gift code! Vitacost is a great source for lots of healthy goodies - I buy coconut oil, essential oils, and whey protein there, too, among other things.)

Have you ever tried stevia? Do you feel that it's a safe alternative to more processed sweeteners?

Linked up at Wellness Wednesdays and Natural Living Monday!